Physical Chemistry of Complex Oxides for Energy and Information Technologies

Staff A to Z

We are investigating the self-assembly of responsive colloids following the main concepts of the supramolecular chemistry, i. e., selectivity, specificity and dynamics [1]. Composite core-shell microgels designed with various size, shape and functionalities are used for this purpose. Taking advantage of the thermoresponsive shell enables to finely and reversibly control the interparticle interactions, thus driving the selective, specific and dynamic association of the different building blocks.

This research direction aims at understanding how order is created from a multicomponent mixture of interacting particles. The major goal is the emergence of self-assembly rules that will contribute to the fundamental understanding of more complex biological processes and allow a major technological step towards the „self-fabrication“ of nanostructured hybrid materials.

Listed below are a few highlights of our current projects on self-assembly.

So-called lock-and-key interactions, i. e., the preferred association of molecular building blocks with complementary shapes, are omnipresent in biology, where they for example describe the interactions between enzymes and their substrates. They are also providing the basis for the formation of well-defined molecular complexes using supramolecular chemistry. This approach from the molecular world has now been successfully transferred to the colloidal domain, i.e. to much larger synthetic particles with complementary shapes. 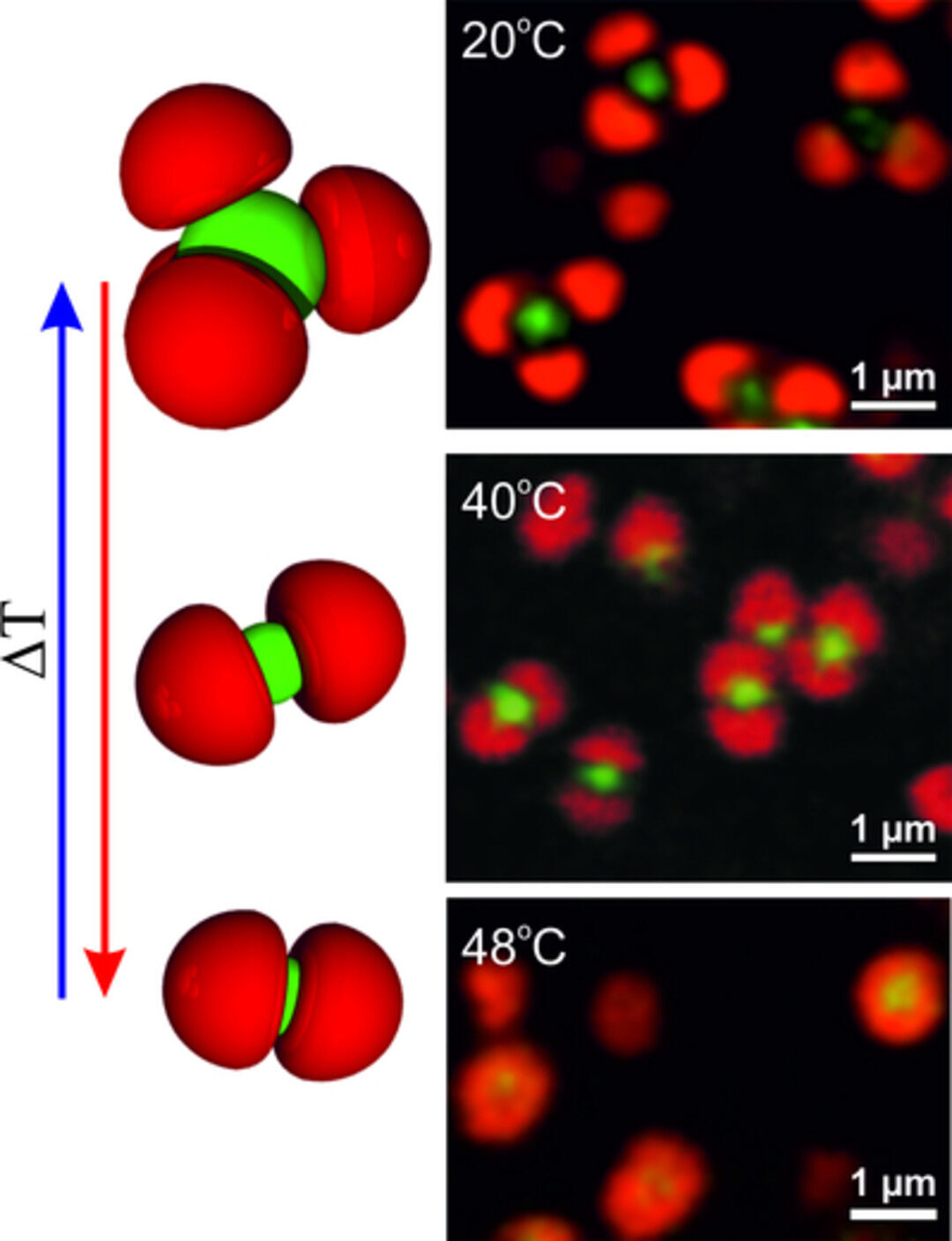 
We are investigating the association between oppositely charged thermoresponsive synthetic lock and key particles. Supported by model calculations, the experiments demonstrate the high specificity of the assembly highlighted by the formation of defined clusters, so-called colloidal molecules. The lock and key particles exhibit temperature-dependent changes in size and conformation that allow to reversibly tune the ‘valence’ of the colloidal molecules (see illustration). This reversible temperature-responsive dynamic self-association process can be seen as the colloidal analogue of adaptive chemistry. The emerging assembly rules could provide new routes to the creation of higher order hierarchical structures, which can be reversibly controlled by external stimuli.  This work has been published in Science Advances [2]. We are currently working on the extension of this approach to more complex geometries and on their modelling using Monte Carlo Simulation (simulation: Björn Stenqvist).

Current studies attempt to understand the reversible formation of stable microtubules and virus. We have demonstrated that even simple ellipsoidal colloids can reversibly self-assemble into regular tubular structures when subjected to an alternating electric field. Our observations show that the formation of tubular structures through self-assembly requires much less geometrical and interaction specificity than previously thought, and advance our current understanding of the minimal requirements for self-assembly into regular virus-like structures [3,4]. 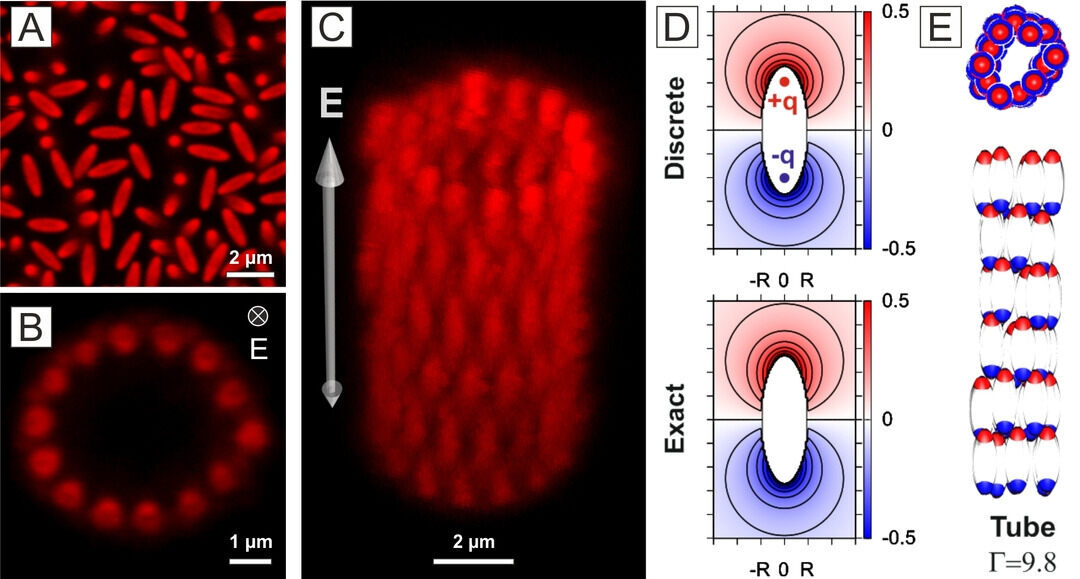 Figure 2: A. Confocal micrographs of ellipsoidal composite microgels.  B. Cross-section of a tubular assembly observed under the application of an alternative electric field. C. 3D confocal reconstruction of a tubule. D. Model calculation of the interaction potential. E. Monte Carlo simulation of the assembly. Reproduced from Ref. [3].


We are currently extending this approach to denser dispersions and to other particle geometries to create switchable superstructures. In parallel, we are studying the polarizability of the different particles by a combination of microscopy and scattering techniques.


Localized electric fields are employed for reversible directed self-assembly of colloidal particles in 3 dimensions. Electric field microgradients, arising from the use of micro-patterned electrodes, were utilized to direct the localization and self-assembly of polarizable particles resulting from a combination of dielectrophoretic and multipolar forces. By extending this approach to concentrated binary dispersions consisting of polarizable and less polarizable microgels, the thermosensitivity of the microgels provide the possibility to adjust the effective volume fraction and the dynamics of the system and to “solidify” the assembly of the field-responsive particles by a temperature quench from their initial fluid state into an arrested crystalline state. Reversible solidification enables us to re-write/reconstruct various 3 dimensional assemblies by varying the applied field frequency.

The work was highlighted in Soft Matter special issue on Emerging Investigators [5]. It was recently extended to more complex force field by superposing two patterned electrodes in order to create 3D structures [6].